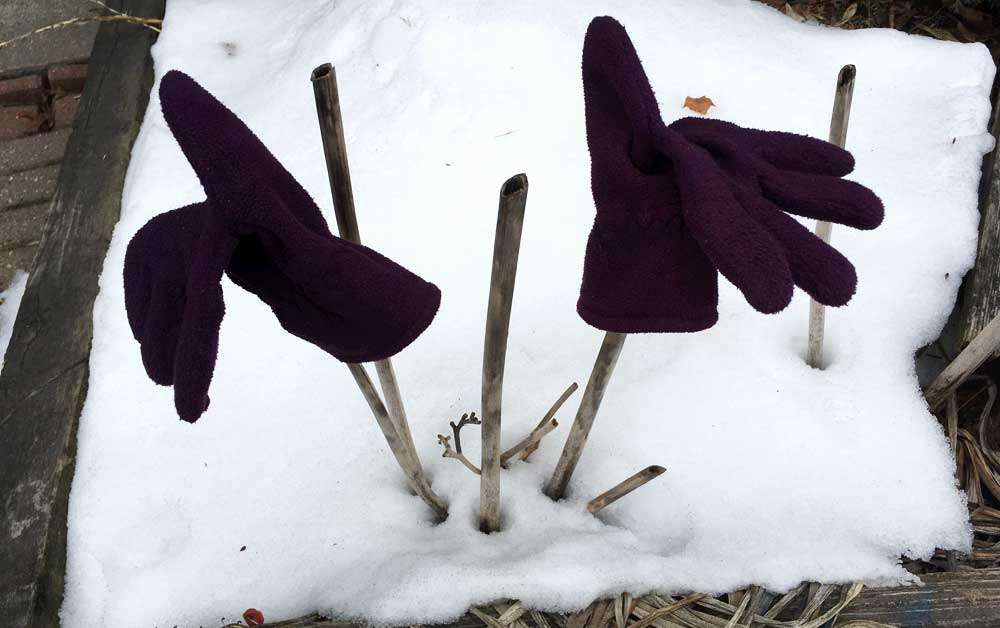 I have been taking pictures of lost gloves since 2002 as my personal response to a feature of the urban landscape that catches my attention and demands examination and documentation. At that time, in the spring of the second year after my mother had died, my elderly father – suffering from dementia and macular degeneration – had to be hospitalized. The resulting hospital stay with its attendant disorientation in unfamiliar surroundings, pushed him farther into dementia and made his care more challenging. That March, we also experienced changeable weather: one day warm and sunny, the next, cold and snowy. Not so great for highway driving, but good conditions for people to lose a glove when they took them on and off, and on and off again. 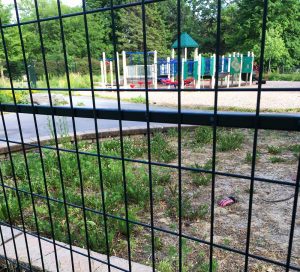 As the snow finally melted, these gloves appeared, like erratic boulders when the glaciers receded. In the heightened state of receptiveness which a crisis brings on, I seemed to see in these lone gloves the lost souls of the world. Their single state seemed to epitomize the lone spirit without its mate, without connection, adrift in the world: “[T]he lonely soul trying to reach out to the shared soul of all humanity” as Terry Pratchett puts it. (Unseen Academicals, 156) And yet, sometimes I saw this phenomenon from a brighter viewpoint. Sometimes the odd gloves came in various bright colours, and appeared like early snowdrops or tulips, heralds of warmer, happier days to come.

This year, there was the exciting discovery of two gloves, lost as a pair. The pair had been rearranged by someone prior to my arrival into a position like a double arm shrug as in, what can you do? It seemed a gesture of laconic acceptance of the vagaries of fate–an appropriate response to the events of this winter and spring. I photograph the articles as they are when I come upon them. Sometimes they are just a lump, but at other times, the gloves assume an all too human shape and attitude.

Recently, I discovered that Tom Hanks is also known for photographing single gloves and other single objects and sending them out in his Twitter feed. In conversation with Jeffrey Brown of NewsHour he said: “It’s really kind of like a visual haiku of separation, loss, maybe freedom, maybe loneliness in the big city” he said. “A lost glove looking for its mate, isn’t that just the way of the world? Aren’t we all just lost gloves, looking for our — if we’re a left hand aren’t we looking for our right hand?” (Elizabeth Flock, Canvas, Oct. 27, 2017.)

Apparently, Hanks is rigorous in his approach: no staged or rearranged gloves to make a better picture. In a Vanity Fair interview with Hilary Weaver (November 16, 2016) he states, “In order for there to be some authenticity, I don’t take photos of staged lost gloves … I never touch the gloves, I don’t pose them, I don’t change their position.“ However, Hanks does augment the image sometimes by adding something of himself. Two of his posts show Hanks having inserted the shadow of one of his own hands into the picture of the lost glove. One shows the shadow of his hand stretched beside the glove, while another has the shadow of his hand pointing at the glove. So far I have not inserted myself into the image, but it is certainly a gesture that adds immediacy and emphasis to the picture. Hanks also supplements the images with captions, something else I have not done. One of his captions of a lost flip flop references the ephemerality of the moment: “In the Spring, gloves. The Fall, flip flops. Bittersweet reminders of Times passing. Hanx.”

Hanks’ final comment in the Vanity Fair interview has a prescient quality to it: “Anything that’s lost has a story behind it.” In his March 11, 2020 Twitter post, the image was of a single surgical glove draped on a waste basket. And indeed, the big story from Hanks that day was that he and his wife, Rita Wilson, had both come down with the Covid-19 virus and were hospitalized in Australia.

And so, each spring – weather conditions permitting – I take pictures of lost gloves. It is my own private response to the season, to grief, to death and rebirth, to the loss of partnership and self, and to the hope of new life.