Trigger Warning: The Power of Art, This is the Nemesis by William Kurelek 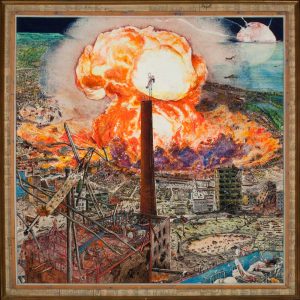 © Copyright: the Estate of William Kurelek, courtesy of the Wynick/Tuck Gallery, Toronto.
William Kurelek (Canadian 1927-1977)
This is the Nemesis 1965
mixed media on Masonite
Art Gallery of Hamilton
Gift of Mrs. J. A. McCuaig, 1966

One of my first encounters with contemporary Canadian art was a rather traumatic one: I was taken to an exhibition at the Hamilton Art Gallery in 1966, in which was a William Kurelek’s painting, This is the Nemesis, (1965,) a chilling work detailing the effects of the explosion of a nuclear bomb over Hamilton, Ontario. Yup, Hamilton: not Montreal, Toronto or Vancouver. Although, if Hamilton was going up in smoke, that meant that Toronto had also been incinerated, and, sure enough, there is another explosion visible on Lake Ontario, back on the horizon, to indicate this.

The most horror-filled part of the painting to my young eyes was the depiction of the helpless hospital patients in the lower right hand corner, burned in their beds. It is a big picture – that may have been at my eye level. Now, my eye is caught by the unfortunate man laminated to the top of his ladder in a fiery boiling cloud above a tall brick chimney. (This image has now been reinforced by images of a trapped crane operator in a construction fire in Kingston, in December 2013.) Scanning the picture closely, you can see the people trying to escape the broken buildings and their attempts to make it to a small pond to put out the flames. A statue in a park remains weirdly still erect by a silhouette of a bloody body on the surface of a wall. Everywhere you look in the picture, you cannot avoid the torn limbs or bloated bodies.

I didn’t know at the time that Kurelek had painted this picture after his recent Roman Catholic conversion in 1957, under the tuition of the English theologian, Edward Holloway, who is said to have informed his apocalyptic vision. Andrew Kear, in his book William Kurelek, Life and Work (Art Canada Institute, 2017) describes This is the Nemesis as “a visual elaboration of the moralizing and
apocalyptic tone of Holloway, whose 1969 book Catholicism: A New Synthesis includes chapter titles such as “Whom do you say Man is?” and “Nemesis.”’ Apparently Kurelek himself described the series as “socio-religious satire,” although the surgeon’s scalpel of satire seems here to have been replaced by the religious bludgeon of the pulpit.

Whatever the theological underpinnings of the painting were, the horrors of the painting itself were enough to induce nightmares. The Cuban Missile Crisis of 1962 was close enough in time that its anxieties were within recent memory.

This was Hamilton portrayed, not far off Hiroshima or Nagasaki or some island in the south . This was my nearest city: it showed the hospital where I was born and was the place I went for dentist appointments. And it was in full colour, when colour had not yet come into the TV world. There was no colour either in the everyday newspapers, only in the Star Weekly and Life and Look, the big American glossies. This is the Nemesis brought home the horrors of nuclear war.

Not being educated in the history of art movements, I didn’t know that the art world at that time was in the throes of love with abstraction and Pop art: the next year at Expo 67, the American pavilion – Buckminster Fuller’s geodesic dome – included works by Barnett Newman (the famous Voice of Fire commissioned specially for this event,) Andy Warhol, Roy Lichtenstein, Ellsworth Kelley, Robert Rauschenberg, James Rosenquist, Jasper Johns, Claes Oldenburg, and Jim Dine: a directory of contemporary artists concerned with seemingly secular matters, not evangelical zeal. Any religious meaning, such as that to be found in the works of Newman or Rothko, was camouflaged within the abstraction of the painting. The American government foregrounded both the Pop artists and the abstract expressionist painters and their works in their propaganda war as authentic contemporary American voices in their cold war maneuvering. Kurelek chose to run against this prevailing secular fashion and remain true to his religious vision.

Unsurprisingly, Kurelek’s paintings in this series were both lauded and attacked by the Canadian art world. One critic saw them as an “indictment of consumerism,” while another saw them as powerful sermons “exhorting us to right conduct.” The painting affected one Hamilton viewer so strongly that she bought it at its first showing at the Isaacs Gallery in Toronto and donated it to the Art Gallery of Hamilton right there and then.

I don’t remember any of the other paintings in that exhibition, just the Nemesis. Not unexpectedly, Canadian art was not high on my list of attractions after that. If that was what Canadian painters were up to, I didn’t want to get involved. I even managed to bury the memory of the picture, so that years later, I didn’t even think of it when choosing a piece of art that had affected me powerfully.

Coincidentally, this work has been recently featured on the Art Gallery of Hamilton website as part of the Collection Showcase with an excellent image of the picture and a short discussion by Connor Jessome, AGH Marketing & Visitor Services Coordinator, so you can view the painting online.

Or go to the Art Gallery of Hamilton and see the original Nemesis. Visit my old nightmare. If you can’t make the trip, go online and view it there on the AGH website. See the power of art.